On 1/31/2017, for the first time in recorded history, the Schumann Resonance has reached frequencies of 36+.

This is a big deal. In 2014, it was considered anomalous for the frequency to have risen from it’s usual 7.83 frequency to somewhere in the 15-25 levels.

And an article discussing how strange this was back in 2014: http://www.trinfinity8.com/why-is-earths-schumann-resonance-accelerating/

Now it is spiking at well over 30 for the past two days. Proof:

Site where this info is from (where you can track in real time): https://translate.google.com/translate?sl=auto&tl=en&js=y&prev=_t&hl=en&ie=UTF-8&u=http%3A%2F%2Fsosrff.tsu.ru%2F&edit-text=

Then click on “Schumann resonance” on the left. The site needs to be translated.

The Schumann Resonance “are a set of spectrum peaks in the extremely low frequency (ELF) portion of the Earth’s electromagnetic field spectrum. Schumann resonances are global electromagnetic resonances, generated and excited by lightning discharges in the cavity formed by the Earth’s surface and the ionosphere.”

It has long been suspected that human consciousness can impact the magnetic field and create disturbances in it, particularly during moments of high anxiety, tension and passion: http://sedonanomalies.weebly.com/schumann-resonance.html

According to the above article, “As human beings we have extraordinary potentials we have hardly begun to study much less understand. Creative gifts, intuitions, and talents that are unpredictable or emergent may become stabilized in generations to come. Hopefully, we can learn to understand both our emergence from an essentially electromagnetic environment and facilitate our potential for healing, growth and non-local communication.”

Many have been reporting the feeling that time has been speeding up. Could the increased frequencies have something to do with this?

As the previously cited article states:

“For many years this resonance frequency has hovered at a steady 7.83 Hz with only slight variations. In June 2014 that apparently changed. Monitors at the Russian Space Observing System showed a sudden spike in activity to around 8.5 Hz. Since then, they have recorded days where the Schumann accelerated as fast as 16.5 Hz. (The graph is usually blue with some green, and no white.)

At first they thought their equipment was malfunctioning, but later learned the data was accurate. Everyone was asking, what’s causing this intermittent spiking activity?

Is the Earth’s frequency speeding up? Since the Schumann frequency is said to be “in tune” with the human brain’s alpha and theta states, this acceleration may be why it often feels like time has sped up and events and changes in our life are happening more rapidly.

These emerging resonances are naturally correlated to human brainwave activity. So this means, we are changing. 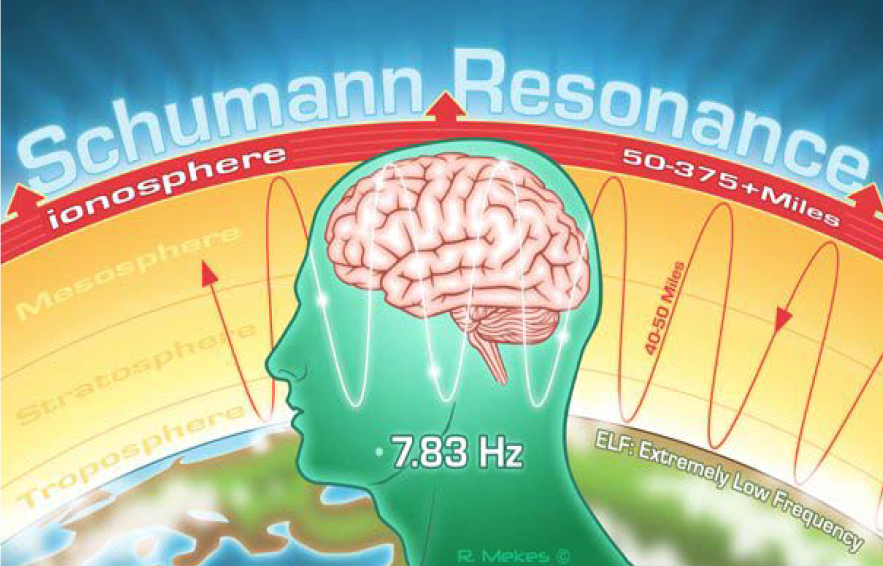 Many years ago I was trained in EEG Neurofeedback, so I looked at what these accelerated frequencies might be telling us about human evolutionary change. A 7.83 Hz frequency is an alpha/theta state. Relaxed, yet dreamy—sort of a neutral idling state waiting for something to happen.

A 8.5 – 16.5 Hz frequency moves one out of the theta range into more of a full calmer alpha state with faster more alert beta frequencies starting to appear. (This correlates with slowly waking up cognitively).

Since the Schumann Resonance has had sudden spikes between 12 – 16.5 Hz, I found this even more interesting. In Neurofeedback, 12-15 Hz is called Sensory-Motor Rhythm frequency (SMR). It is an ideal state of “awakened calm.” Our thought processes are clearer and more focused, yet we are still “in the flow” or “in the now.”

“In other words, Mother Earth is shifting her vibrational frequency and perhaps so are we. This may be one of many signs that we are AWAKENING.”

Scientist’s report that the Earth’s magnetic field, which can affect the Schumann Resonance, has been slowly weakening for the past 2,000 years and even more so in the last few years. No one really knows why.

I was told by a wise old sage from India that the magnetic field of Earth was put in place by the Ancient Ones to block our primordial memories of our true heritage.

This was so that souls could learn from the experience of free-will unhampered by memories of the past. He claimed that the magnetic field changes are now loosening those memory blocks and we are raising our consciousness to greater truth. The veil is lifting. The blinders are coming off.

If true, it raises even more intriguing questions.

What are your thoughts on what will happen if we maintain spikes of 30+?

2/2/17 update: we are now in our 3rd straight day of 30+ resonance, and it seems like it is getting more constant / stronger!