For months now, there’s been speculation that researchers might have finally created time crystals – strange crystals that have an atomic structure that repeats not just in space, but in time, putting them in perpetual motion without energy.

Now it’s official – researchers have just reported in detail how to make and measure these bizarre crystals. And two independent teams of scientists claim they’ve actually created time crystals in the lab based off this blueprint, confirming the existence of an entirely new form of matter.

“This is a new phase of matter, period, but it is also really cool because it is one of the first examples of non-equilibrium matter,” said lead researcher Norman Yao from the University of California, Berkeley.

What Time Crystals are can be best understood in the following way:

Think of normal crystals. They have an atomic structure that repeats itself in space; just like a carbon lattice of a diamond. But they’re motionless because they’re in equilibrium in their ground state.

Usually when a material is in ground state, also known as the zero-point energy of a system, it means movement should theoretically be impossible, because that would require it to expend energy.

But time crystals have a structure that repeats in time, not just in space. And it keep oscillating in its ground state.

It’s like their matter and structure is created by a time loop that repeats itself. It appears as the time crystal is moving without energy but in fact, it is being created. To understand this you need to think 4 dimensionally.

Imagine it like jelly – when you tap it, it repeatedly jiggles. The same thing happens in time crystals, but the big difference here is that the motion occurs without any energy.

A time crystal is like constantly oscillating jelly in its natural, ground state, and that’s what makes it a whole new form of matter – non-equilibrium matter. It’s incapable of sitting still.

Yao and his team have now come up with a detailed blueprint that describes exactly how to make and measure the properties of a time crystal, and even predict what the various phases surrounding the time crystals should be – which means they’ve mapped out the equivalent of the solid, liquid, and gas phases for the new form of matter. 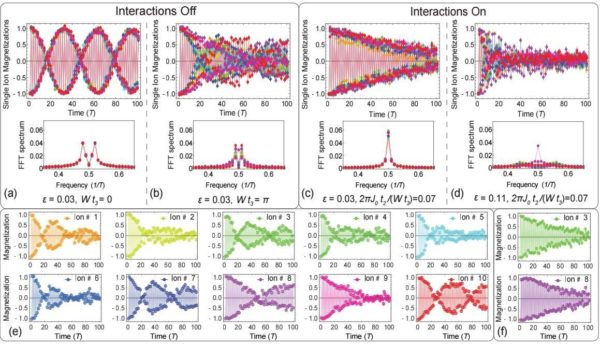 “Wouldn’t it be super weird if you jiggled the Jell-O and found that somehow it responded at a different period?” said Yao.

“But that is the essence of the time crystal. You have some periodic driver that has a period ‘T’, but the system somehow synchronises so that you observe the system oscillating with a period that is larger than ‘T’.”

Under different magnetic fields and laser pulsing, the time crystal would then change phase, just like an ice cube melting.

Yao’s blueprint has been published in Physical Review Letters, and you can see the Harvard time crystal paper here, and the University of Maryland paper here.