This is hard-core, sci-fi problem, but the reason why I am asking this question aims on a different, more philosophical direction. “What if you were erased from time?” raises another question, “How different would be the lives of others?” which raises the ultimate question, “How much do you matter?”

The sacred geometry of The Universe entangles our lives in a very fragile scheme. If only one tiny piece of this structure is missing than the whole model is taking a new form. This means that everything we do, no matter how small that thing is, we affect the reality we live in, in a way not a lot of us can clearly understand. If you were erased from time, the alternate reality would be a lot different than you can imagine. 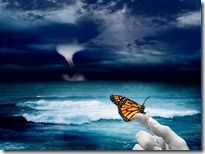 The butterfly effect shows that something as small as a butterfly can affect the reality so much, that its existence may create a tornado in the future. Now imagine what kind of affect would a human have. The truth is that No Matter Who You Are, You Matter!

So, we know that we matter. What we really want to know is, How do we affect the lives of other people? Would they have lived better or worse without us?

This is something that every one of us wants to know even if this scenario happening is very much impossible. We want to know this because we feel the need to have value, to matter. We want to be significant to the world, the masterpiece that the world deserves.

Here is the ugly truth my fellow masterpieces, no matter how good or noble you are, your existence has created a lot of sadness. Of course it wasn’t intentional but you were the part of it just like the butterfly was a part of creating a tornado. On the other hand, your existence has created a lot of happiness too. You will never be able to measure the both of them. The only thing you can do is do what you think is right.

It is not important how significant you are to the world, what’s important is to be significant to someone who means the world to you, to affect their world with happiness. You cannot take the responsibility of everything that happens in the world, what you can do is be responsible of your world, Make Your World A Better Place. With that you are making the world of people who love you a better place.

If you were erased from time the reality would have been much different, maybe I wouldn’t have written this text, but people would have lived their lives in a same tempo they do now, there still would have been sadness and happiness. It is not important how much you affect the world, what’s important is how much the world has affected you. How many people changed your life, made you happy. How many times you have smiled, cried, how many people touched your life. So, what if you have been erased from time? It would have mattered as same as people who could have existed matter to you now. What’s important is that you exist, make sure that the world is a better place with you in it. Do Something That Matters To You!