According to a new breakthrough study, the Octopuses DNA is not of this world! That is right, their genome is far more complex than a human and contains around 33,000 protein-coding genes! This never before seen Alien DNA is nothing like anything else we have studied here on earth.

The Oceans are full of mysteries that we are still unlocking every year as marine biologists are able to go deeper and study with better technologies. Recently a group of researchers decided to look into the DNA codes around the cephalopods in order to better understand them.

This classification covers various mollusks such as the squid, cuttlefish and of course the octopus. Scientists believe that their evolution goes back at least 500 million years which means they would even predate land plant species!

They have some incredibly advanced biotechnology on them especially when you think about their sophisticated chameleonic skin color changing response, camera-like eyes, and extremely flexible bodies. Considering these are all invertebrates, they have a very large nervous systems as well.

These highly developed brains are considered to be extremely intelligent and they have been able to prove their skills by solving complex puzzles.

Dr. Clifton Ragsdale from the University of Chicago, U.S. said:

“The octopus appears to be utterly different from all other animals, even other molluscs, with its eight prehensile arms, its large brain, and its clever problem-solving abilities. The late British zoologist Martin Wells said the octopus is an alien. In this sense, then, our paper describes the first sequenced genome from an alien.” 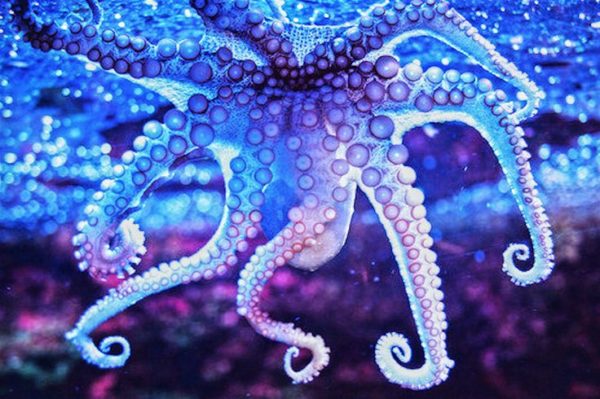 Imagine your body being full of stem cells that could rapidly change based on what you needed from moment to moment. This would be an incredibly advanced biology that could make a huge difference in our ability to adapt to changes in the environment and survive extreme conditions.

One of the reasons why biologists wanted to study the octopus to such great lengths is because they seem to naturally be able to adapt and solve very complex problems. The Octopus’s ability to learn and remember baffled scientists which led to a DNA sequencing test.

This new genome may help explain why they are able to rapidly change colors and even communicate with the color of their skin.

The scientists also found that the genome is full of transposons which are also known as “Jumping Genes”. These genes rearrange themselves within the genome. Though the scientists aren’t sure what these highly advanced genes do, there is something really alien going on inside the neurons of the Octopus.

“With a few notable exceptions, the octopus basically has a typical invertebrate genome that’s just been completely rearranged, like it’s been put into a blender and mixed,” said Caroline Albertin, graduate student in Organismal Biology and Anatomy at the University of Chicago. “This leads to genes being placed in new genomic environments with different regulatory elements, and was an entirely unexpected finding.” (Source)

The scientific report concludes that Octopuses have ‘Alien’ genes that are both shocking and intriguing the marine biologist community.

It may be time to look deeper in our own oceans and see what other Alien mysteries are buried in the depths.