Do you ever talk to yourself? Do you catch yourself asking questions and even giving yourself advice? Have you feared being labelled as a freak?

Well, do not worry. According to a couple of scientific researches talking to yourself can actually be a sign of high intelligence and greater IQ than average.

One scientific research has shown that people who tend to talk to themselves actually have greater IQ than those who don’t.

According to Einstein.org, Einstein “used to repeat his sentences to himself softly.” Read on to find out the 5 reasons talking to yourself is an act of intelligence.

5 Benefits Of Self Talk According To Science: 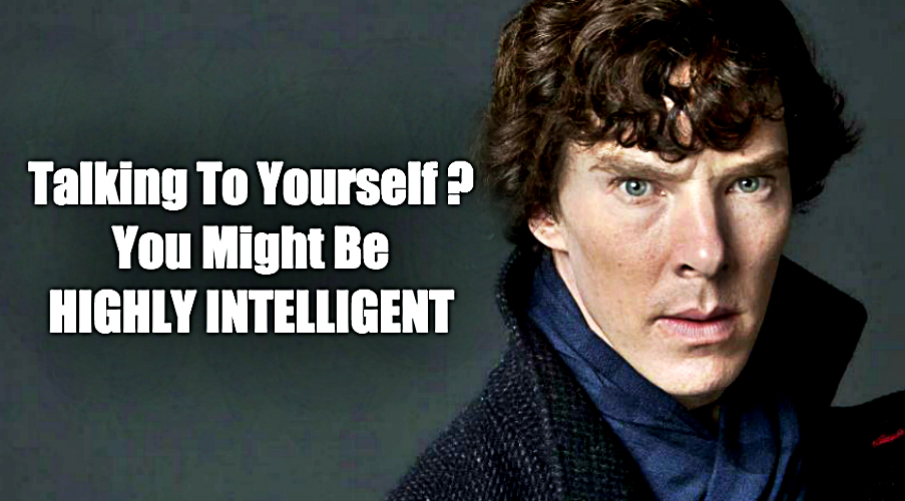 According to a study published in the Quarterly Journal of Experimental Psychology, Daniel Swigley and Gary Lupyan, renowned psychologists, have found that talking to yourself is actually healthy.

An interesting experiment was conducted where around 20 people were given the name of a thing, a potato, an apple or cheese, and asked to find that item in the supermarket.

In the first case they had to do it silently while in the second case they were allowed to talk and say the name of the assigned object.

The second time they completed the task much more efficiently because talking aloud helped their ear hear the item and made it easier for the brain to retain it.

So next time you want to remember something better and faster, repeat it aloud.

“Speaking to yourself isn’t always helpful, if you don’t really know what an object looks like, saying its name can have no effect or actually slow you down. If on the other hand, you know that bananas are yellow and have a particular shape, by saying banana, you’re activating these visual properties in the brain to help you find them.”

Thus just thinking about what you are looking for is not enough, when you say it its name you automatically visualize it and give it a form.

This makes it easier for your mind to take into perspective what you are actually seeking, and it gives you clarity to think about it on a much realistic and achievable way.

By thinking loudly you are helping your mind visualize your thoughts and think about them on much clearer way.

3. Helps you learn better and faster.

According to Live Science, “self directed speech can help guide children’s behavior, with kids often taking themselves step by step through tasks such as tying their shoelaces, as if reminding themselves to focus on the job at hand.”

Try to remember the first time you played a board game. You must have been confused since it’s a new process and then, when you said the steps aloud while playing the game, you gained a better understanding of the situation.

This is the reason you remembered it the next time you played.

This is exactly how talking to yourself helps you learn better, your mind reexamines the thing you have learned and teaches it to itself.

This process of learning, evaluating and teaching creates a much better understanding about the subject you have learned.

4. Organizes the chaotic chatter in your mind.

Psychologist Linda Sapadin says when we think we silently weigh possibilities. This is important. You should talk to yourself because you can prioritize what you want.

When you are stuck at crossroads, You have to choose only one path and talking aloud will make you more sorted.

You will learn to manage the overwhelming responsibility of many options better.

By talking to yourself you are giving order to your thoughts and by giving order, you can better see and compare different choices.

This gives you quicker and better choice while taking a lot less energy than facing many different options silently.

5. Motivates you to achieve what you want.

We all have certain things we dream to achieve. Just having an idea won’t make your dreams reality. You need to take action and sometimes taking action is hard. You lack inspiration, motivation and will. We all have moments of weakness.

In such cases having a mentor or someone to push you can make the difference between achieving your goals and giving up. But since not all of us have someone to push us in those moments, talking to yourself is the next best thing.

Talking to yourself, giving yourself advices and motivating yourself can give you enough push to go that extra step when you lack the motivation and will.

That’s why you need to motivate yourself. And by doing this loudly you are tricking your mind to think someone else is pushing you forward. This way, you’ll stay motivated and waste less time. You will concentrate on the things that matter and not on petty things.

So if you talk to yourself, do not worry. Walk on Einstein’s path of success and you’ll soon reach your goals. Keep talking!