Scour the aisles of the grocery store, and you may be astonished to find just how many types of Pringles there are out there. But while there seems to be no end to the diversity of junk food, a comprehensive infographic has been put together to show you just how few corporations provide us with the hundreds of products available at our fingertips.

Oxfam International created the infographic that exposes an inconceivable reality: Just 10 main corporations manufacture the majority of what we purchase at the market.

The fact that you can count on just two hands who controls our groceries is a bizarre thought, but a much-needed realization. They include: PepsiCo, General Mills, Kellogg’s, Associated British Foods, Mondēlez (formerly Kraft Foods), Mars, Danone, Unilever, Coca-Cola, and Nestle.

However, once I saw this I started wondering about other industries. What I found astounished me.

It seems there is a pattern in every industry for larger companies to become even larger by buying of smaller ones and spreading.

There are companies with different standards and structures, but eventually the giant ones eat, or let’s say buy, the smaller ones. Think about it, you want to work at any company in the world, the possibility that it’s owned by another larger one is huge.

These giant corporations make it extremely difficult for startups and small businesses to compete at all. If you start small you’ll either get bought and play according to their rules making them even bigger, or you’ll be stomped by the giants.

Here is the list of companies that own the media and the news: 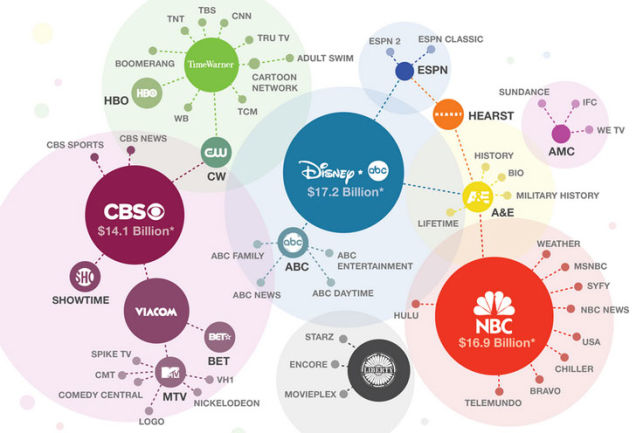 6 Companies that own most of the news industry: Bouygues Construction; Lagardere; Fininvest; Gazprom; Bertelsmann; News Corporation;

Here is the list of companies that own the fashion industry:

These few companies are so powerful that their influence has major impact on the environment, on people’s diets, people’s health, what the world consumes, thinks, believes in.

The environmental impact solely these 10 food companies have on the health of our planet is disturbing.

As Business Insider reported, “the Big 10 emitted 263.7 million tons of greenhouse gas emissions in 2013 and if the companies were a nation, it would be the 25th most polluting country in the world.”

Not to speak about the fashion industry and its influence on killing animals for their fur and skin.

It’s not about why they are big. It’s their right to be as big as they can. But why don’t they do something to fix important global issues with their powerful influence.

Just imagine what these companies can do if they focus on improving the world. Slight changes in the way they do their business can have significant improvement to our environment, to our health, to our global wellbeing.

If you are already incredibly rich, and have a power to make the world a better place, why would you choose to be even richer knowing it will harm the world?

But that’s not all.

Here is the list of companies that own the internet:

4 Banks that own majority of other banks: Wells Fargo; Bank Of America; JPMorgan Chase; Citigroup;

And here is how all of these companies are connected between each other: