Researchers from Imperial College London, working with the Beckley Foundation, have for the first time visualized the effects of LSD on the brain.

Dr Robin Carhart-Harris, from the Department of Medicine at Imperial, who led the research, explained: “We observed brain changes under LSD that suggested our volunteers were ‘seeing with their eyes shut’ – albeit they were seeing things from their imagination rather than from the outside world.  We saw that many more areas of the brain than normal were contributing to visual processing under LSD – even though the volunteers’ eyes were closed. Furthermore, the size of this effect correlated with volunteers’ ratings of complex, dreamlike visions.” 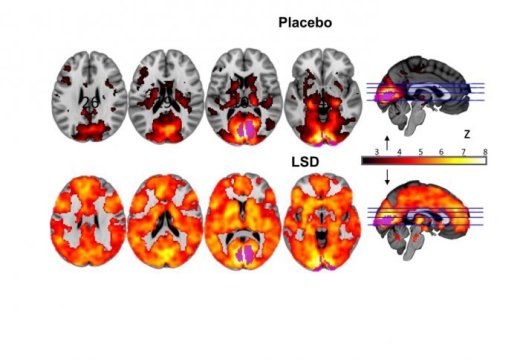 But what scientists are most hyped about is what all participants reported: a fundamental change in the quality of their consciousness under LSD.

Dr Carhart-Harris explained: “Normally our brain consists of independent networks that perform separate specialized functions, such as vision, movement and hearing – as well as more complex things like attention. However, under LSD the separateness of these networks breaks down and instead you see a more integrated or unified brain.”

This means that you become more YOU. The areas of your brain that you neglected while “growing up” and trying to fit into the mold are reactivated. Your brain is unrestricted, it functions with its full potential and the limits of what you think as yourself are stretched giving you a broader specter of your true self.

The EGO, a program people develop to better fit into the world and define themselves, is dissolving into the real potential of who you truly are. Instead of letting this program separate your brain into different areas, pathways and labyrinths, your brain is integrated and unified just like when you were a kid.

Dr Carhart-Harris continues,“Our results suggest that this effect underlies the profound altered state of consciousness that people often describe during an LSD experience. It is also related to what people sometimes call ‘ego-dissolution’, which means the normal sense of self is broken down and replaced by a sense of reconnection with themselves, others and the natural world. This experience is sometimes framed in a religious or spiritual way – and seems to be associated with improvements in well-being after the drug’s effects have subsided.”

References:
– “Neural correlates of the LSD experience revealed by multimodal neuroimaging,” by Robin L. Carhart-Harris et al., is published in the Proceedings of the National Academy of Sciences, 11 April 2016
– “LSD modulates music-induced imagery via changes in parahippocampal connectivity,” by Mendel Kaelen et al. is published in the European Neuropsychopharmacology